My working life started in retail, where I worked in a shoe store for £2.05 per hr!  I did this whilst I was still at school at the weekend and when I left school and moved on to University to study Marketing and Human Resources Management, I worked in a Call Centre part time selling insurance products over the phone and I did this until I graduated.

I struggled to secure employment in the marketing area, the area I thought I wanted to work in but was offered a job in Commercial Recruitment as a Recruitment Consultant which I took and lasted 9 months….. I realised very quickly that I was not cut out for selling people but I enjoyed helping people find employment. 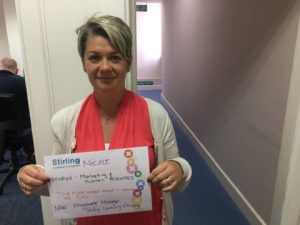 The skills and experience I gained from this job helped me to move into the voluntary sector where I have now worked and supported people to get back in to employment, education, training and volunteering for over 18 years.

Initially I worked as an Employment Consultant and Employability Officer where I worked with people on an individual basis and in small groups to improve their employability skills and move on with their lives.

I am now a Programme Manager who is responsible for planning and coordinating training courses to support people to move on with their lives.

Nicole’s No Wrong Path Story tells us that our degree does not define our career options!

My intention was stay on at school and go to University to become an Architect!!  Unfortunately in 5th year I fell ill and was in hospital for a couple of weeks.  A couple of weeks doesn’t sound a lot especially from 1st to 4th year but in 5th year it was tough, and going back to school and trying to get caught up was really difficult so I had to leave.  I was quite gutted because I actually enjoyed school unlike a lot of my friends.

I then went to college where I was doing painting and decorating.  I chose painting and decorating because a lot of my friends were doing it and a local company seemed to have lots of opportunity for apprentices so it seemed like the right thing to do.  I got towards the end of my course and I was put out on placement with another local business.  It didn’t work out quite how I wanted it to because sanding cupboards all day wasn’t what I had in mind.

I was unemployed for a bit and I was desperate for a job so I started with a local cleaning company on nightshift and worked 6 nights a week cleaning the Spa at Sheraton grand hotel in Edinburgh.  I really enjoyed it because finishing early meant a wee stint in the sauna and pool.  The bad thing was I was sleeping all day and only getting up for work which wasn’t really a life so I packed it in. 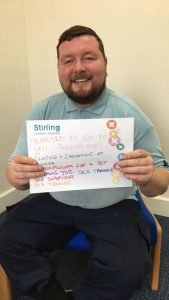 I then started working for Laing O’Rourke doing groundwork’s.  I got this job through a family member and was there for quite a while and loved it! We worked on the indoor snow zone that’s was in Braehead in Glasgow and then the multi-story car park in Dundee.  Unfortunately the work dried up so I was back to square one.

After a year or two of working on and off with agencies and picking up work here and there, unforeseen circumstances meant that I found myself unemployed and homeless.  I found out there was a training course for local people called Raploch URC!!  Although I had the skills to get a job, the cost of homeless accommodation was just too much to pay.  I just wanted to stay busy so I started the URC programme doing an SVQ level 1 in construction.  I worked through the award and it was pretty straight forward.  The manager seen potential in me and asked if I would interview for a supervisors job for the seasonal grass cutting.  Fortunately I got the job and since then I haven’t looked back.

I was given a 6 month contract, which was then extended for another 6 months which was great because it allowed me time to try and sort stuff out.  A short while later more good news.  I was offered a flat in Bannockburn!  Then I was offered a three year contract with the company in a supervisor/team leader position.  Two years in to the post there was a reshuffle within the company and the trainer’s job became available.  I was encouraged to go for it, and me thinking I had nothing to lose decided I would give it a go.  Got the job!  Couldn’t believe it.  In that short period of time I had went from “train-ee” to “train-er”.  It was bizarre.  Mid-way through my contract an offer came up with another company so I left and started there.  That didn’t last as long as I had hoped but fortunately for me the supervisors job with Raploch URC was available again, so I went for it. Once again got the Job.

In another fortunate turn events the trainers job came up again, so again I interviewed for it……………….And here I am.

Sean’s No Wrong Path Story tells us that exam results do not define you. You can achieve many great things without them! There are many paths into employment.