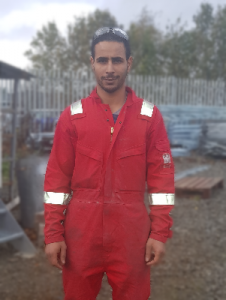 started working with us in January 2018. Originally from Egypt Abdelmaaboud moved to Greece in 2016 to try and find work. He undertook numerous jobs within the construction industry and could turn his hand to anything, whilst in Greece he met his partner (now Wife) and they both moved to Scotland in late 2017.

He first attended Stirling Community Enterprise back in January where he completed an 8-week ALBA Construction Course. His Trainer noticed straight away that he was skilled and he had no issues completing the tasks, however his health and safety awareness was non-existent. The main issue was that he struggled with the language barrier as his English was limited, and this would be a major issue due to the importance of health and safety within the construction industry.

He was referred by us to Stirling Council for support with his English while we continued to work with him on workplace health and safety issues. A lot of work was focused on recognizing safety signs, manual handling, PPE, Risk Assessments, COSHH and numerous other subjects.

We continuously developed his knowledge, and all the while his family were receiving support with their benefits from our Employability Intervention Worker.

We then helped Abdelmaaboud apply for ITA funding so that he could fund his CSCS training, test, card and transport to the test centre. Again, he was supported by us to undertake the training as the CSCS training disk features an audio option that was ideal for Abdelmaaboud as hi strength was understanding English through speech. However; an issue came with the first part of the training, as the required SQA assessment did not have a similar audio feature. to overcome this issue we had the learning material in the booklet translated to Arabic to allow him to prepare for his assessment. This was a great help for Abdelmaaboud, When it came to do the SQA assessment, he sat in a private room as the questions were to be read out to him by a member of our staff whilst the invigilator observed.

Abdelmaaboud successfully passed both assessments first time achieving his CSCS and went on with support do undertake his driving theory assessment and has since passed his driving test.

In September SCE arranged a work placement for Abdelmaaboud with FES, who we had recent success finding employment with for another learner. Abdelmaaboud completed a 9-week placement for which he attended two and a half days a week, by the end of the placement Abdelmaaboud was offered a full-time position with FES and has since been taking all the over time he can get and has also had a pay rise.

Our trainer Sean went to see Abdelmaaboud at FES as part of our aftercare. Abdelmaaboud has told Sean that the Job has been great, and the family have been fortunate enough to clear all their rent arrears and are getting on so much better.

FES had also mentioned that Abdelmaaboud has become a very valuable team member and they are delighted with the partnership with Stirling Community Enterprise.